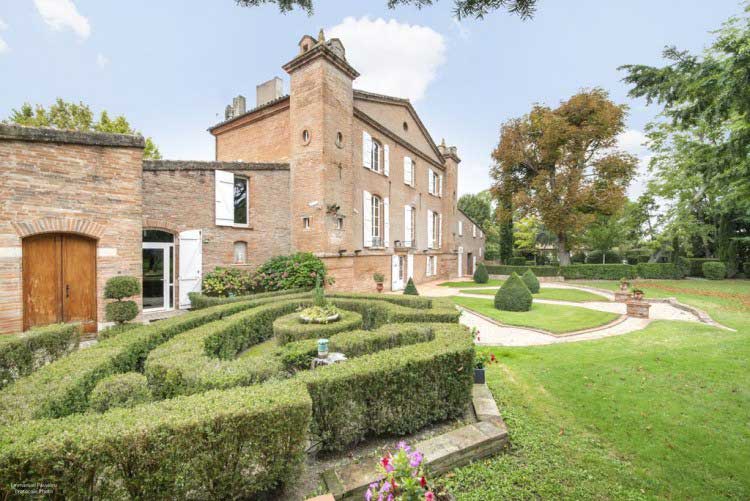 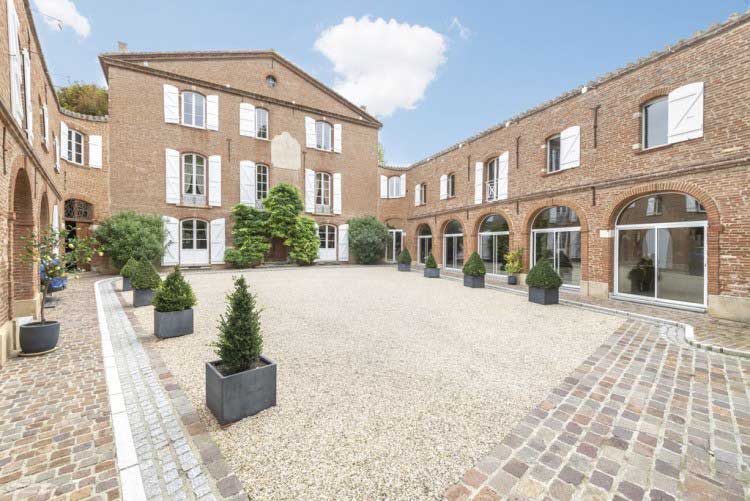 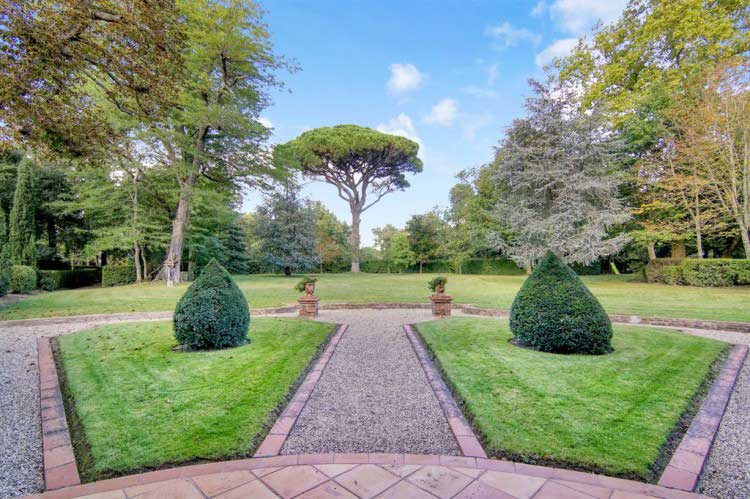 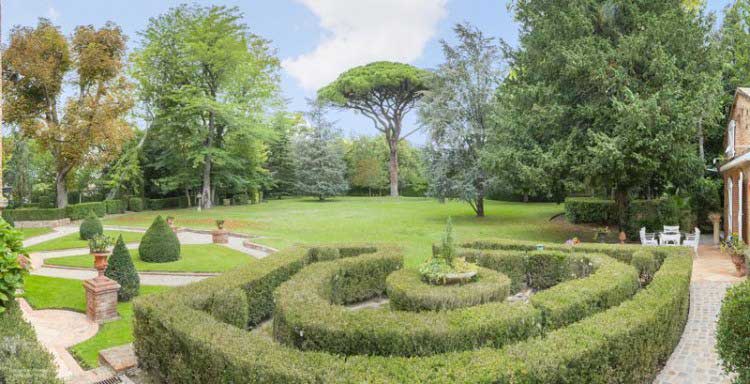 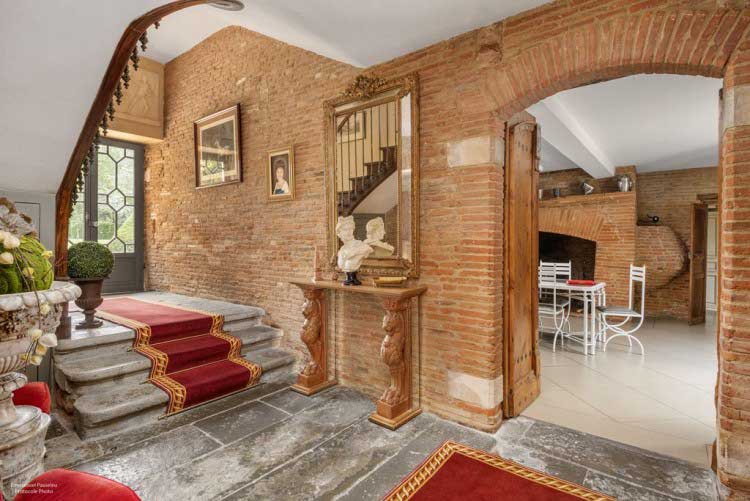 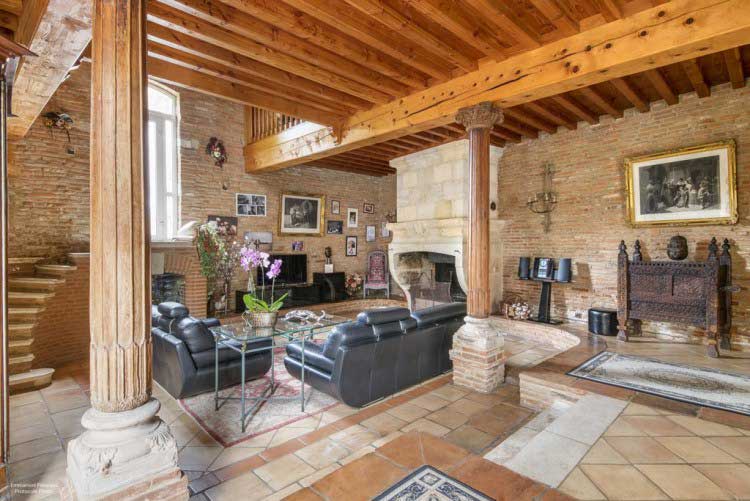 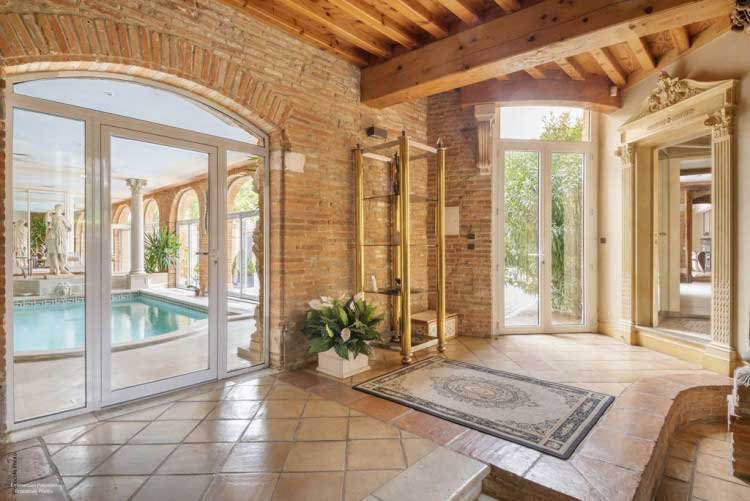 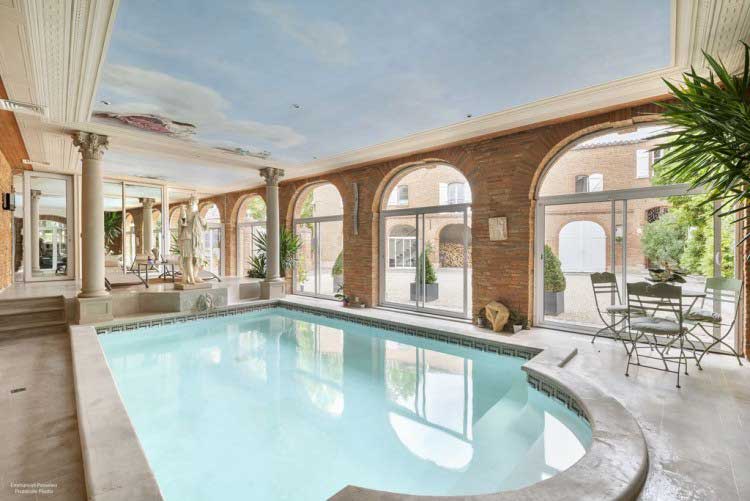 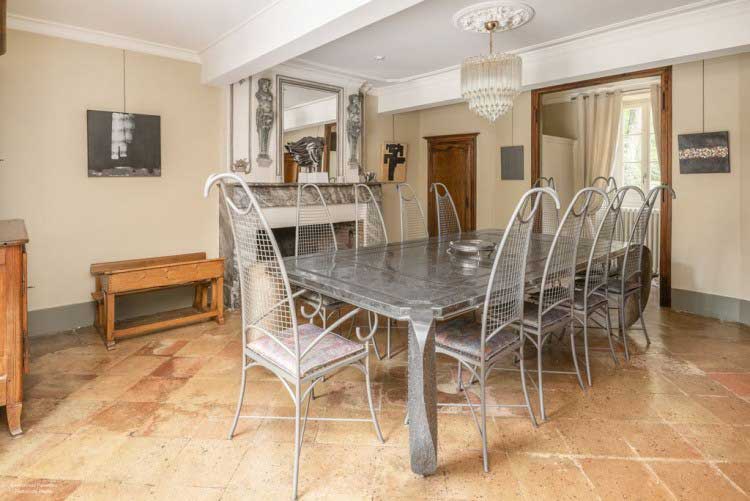 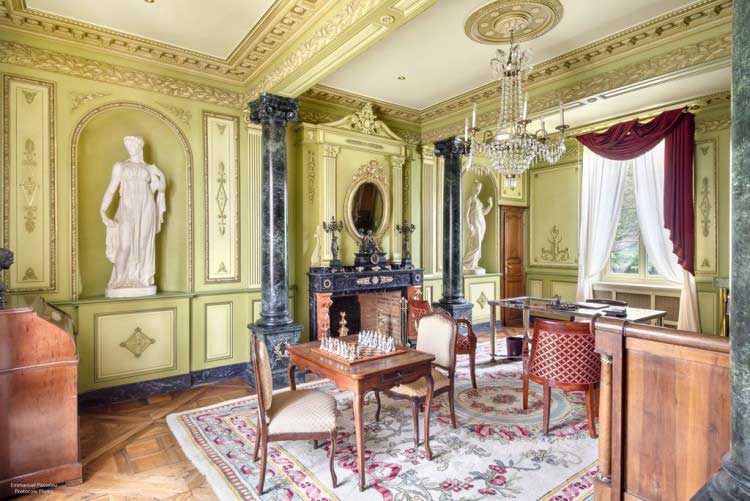 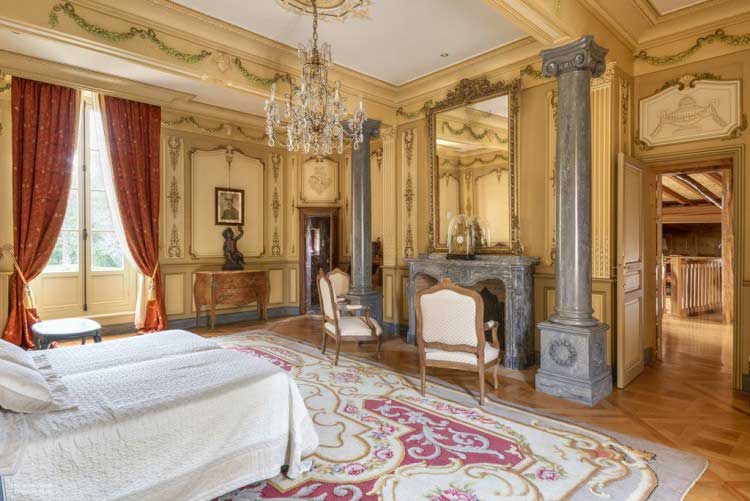 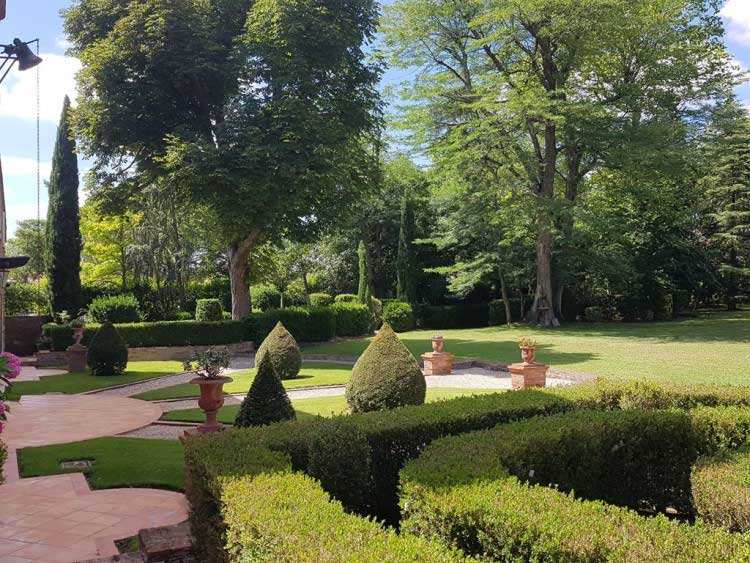 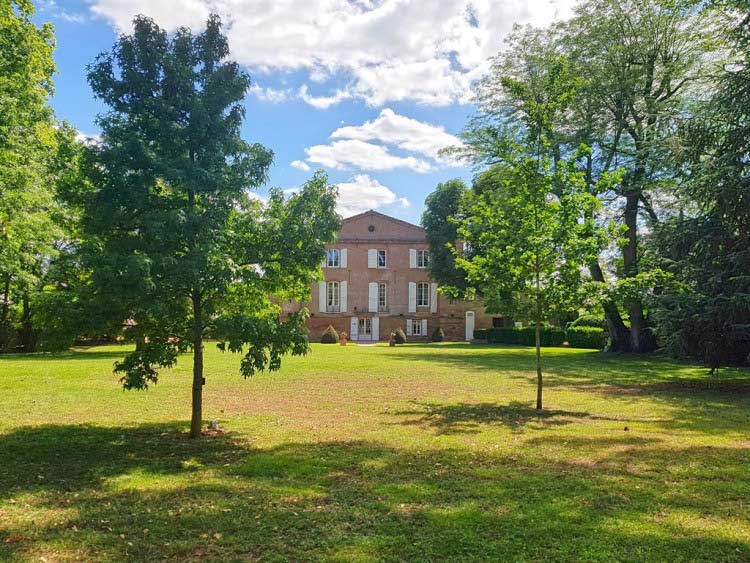 Ref.3988 : Rare mansion for sale at 15 minutes from Toulouse.
About fifteen minutes from Toulouse, capital of Occitania, built in the heart of a small town with all amenities, this beautiful mansion is particularly well located to offer you the dynamism of a big city like Toulouse and the quietness of a small town where the brick buildings are still very present.
Blagnac international airport is only 20 minutes away, the mountains (Pyrenees) only 1h30 away as well as the sea!
We find a stone marked 1769 but the site is certainly much older. This property was the property of the bishopric, used as a secondary residence.
What strikes you most, when you push the heavy gate, is the elegance of the red brick facades... You can imagine the hours spent by the companions of yesteryear and you are quickly transported to another era. And yet, the interior has many surprises in store for us, so much so that the old elements have been preserved and enhanced, but also by the level of comfort and the integration of facilities such as swimming pool, sauna, hammam, jacuzzi... The mix is successful, each era has found its rightful place!

With a living area of approximately 545sqm, the distribution of the rooms is as follows:

On the ground floor:
To the right of the entrance hall, there is a large, modern, luxuriously equipped kitchen and an old brick bread oven in operation.
The hallway leads to a laundry room and then to a large living room with an imposing beamed ceiling, supported by Victorian columns of the most beautiful effect. There is also an imposing stone Bordelaise fireplace. The floors here are terracotta.
Access to the park is possible via a flight of steps from the living room.
On the other side of the living room is the indoor swimming pool with a statue (a copy of Gaby's Diana) between two columns, evoking the atmosphere of the Roman baths. We are here in the east wing of the house. A staircase also leads to the first floor.

To the left of the entrance hall is a dining room with a terracotta floor, old arched walnut doors made from a single piece of wood, a contemporary metal table, another example of a marriage of period and style!
The through entrance, located in the centre of the building, brings a soft light to the room and allows, in addition to the access to the upper floor, to go directly into the park.

First floor:
The refinement here reaches new heights when we enter the Empire style study. We find "sea green" columns, moulded woodwork in a soft and restful colour, a marble fireplace with two caryatids. Two niches integrated into the woodwork house Roman statues on either side of the fireplace. The old parquet floor with its many species is laid in "Versailles" style.
On the other side of the staircase, we find a large room with columns, a fireplace and woodwork with frescoes painted by an artist. Once again we have a harmonious decoration obtained thanks to the use of noble materials, the know-how of artists and craftsmen, and the sensitivity of the owners who have been able to lead and participate for many years in the renovation of this building.
The next room, in a completely different style, as it is under the eaves, houses an office, a billiard room and a play area for the children. Here we find the pink brick of the walls, raw wood, wooden posts of strong section with armpits, another charm! A void on the living room allows a different view on the decoration below.
In the east wing, a gym has been fitted out, a wellness area with hammam, a spa and a sauna. Ceramics, small pebbles, columns and planted planters contribute to the atmosphere of this area dedicated to relaxation. This large and bright room overlooks the enclosed courtyard of the house.

Second floor:
This floor is the night floor par excellence with three bedrooms, two of which open onto the reception courtyard and one onto the park. The distribution, well studied, makes that we have on one side of the staircase two rooms with a shower-room, a dressingroom and on the other one room as well as an immense bathroom of twenty square meters equipped luxuriously. This unit, separated from the other rooms, offers total privacy, like an oasis in the house!

The outbuildings comprise:
In the wing, a flat, totalling 64sqm of living space, has been converted on the first floor with access via a metal and stainless steel cable staircase from a ground floor hallway. There is a living room/kitchenette, a shower room, a lounge and a bedroom. The whole is electrically heated and completely autonomous and independent.
On the ground floor there is a storage room, a wood shed, a workshop, a garden shed and magnificent stables. On the first floor there are several storage rooms.
A second garage accessible directly from a small alley is also available with communication inside the property.
The outbuildings, not including the 64sqm annex, represent a developed surface area of approx. 155sqm.

The rarity of this property also comes from the size of its enclosed grounds with trees covering an area of 5,700sqm in the heart of a small town just a stone's throw from Toulouse. The location of the mansion, at the end of the plot, with its closed inner courtyard as a rampart, and its two protective brick wings on the sides, means that the park retains a large surface area where the owners have created a special atmosphere. On the right, a brick fountain delights the eye and the ear, and a little further on, a fully equipped summer kitchen allows you to enjoy the place with a view of the park and the façade flanked by two towers on the sides, the highest points of the building. A horseshoe-shaped path lined with shrubs and ornamental plants leads around the park. One can see busts on pedestals, symbolising the four seasons, small slates indicating the Latin and French names of the age-old trees, of various species such as the umbrella pine, the honey locust, the Sophora japonica... The walk ends by returning to the building where one can see some interlacing of magnificent pruned boxwoods, free of moths, also testifying to the care given to the exterior.