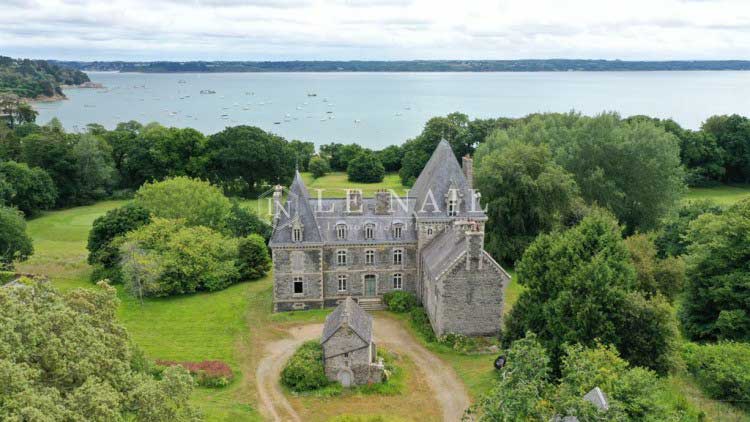 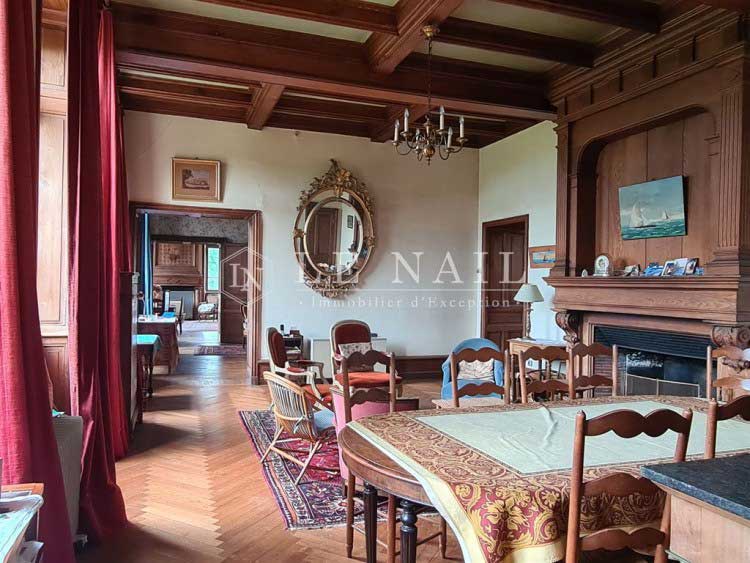 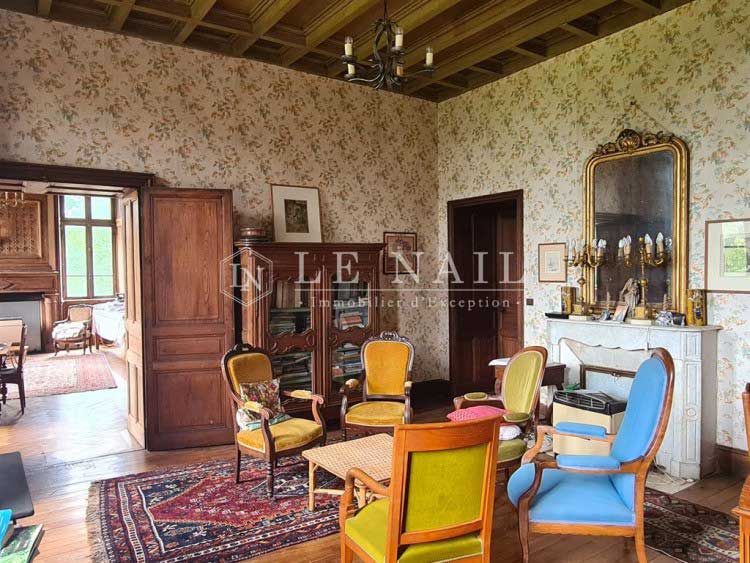 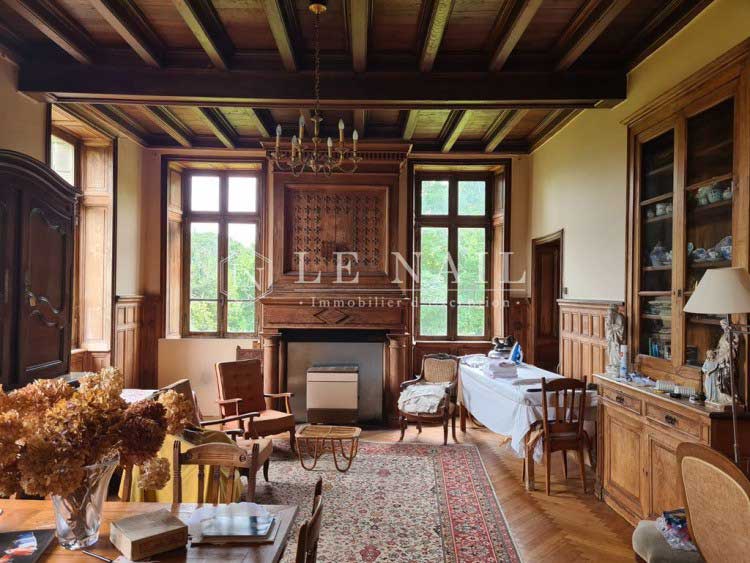 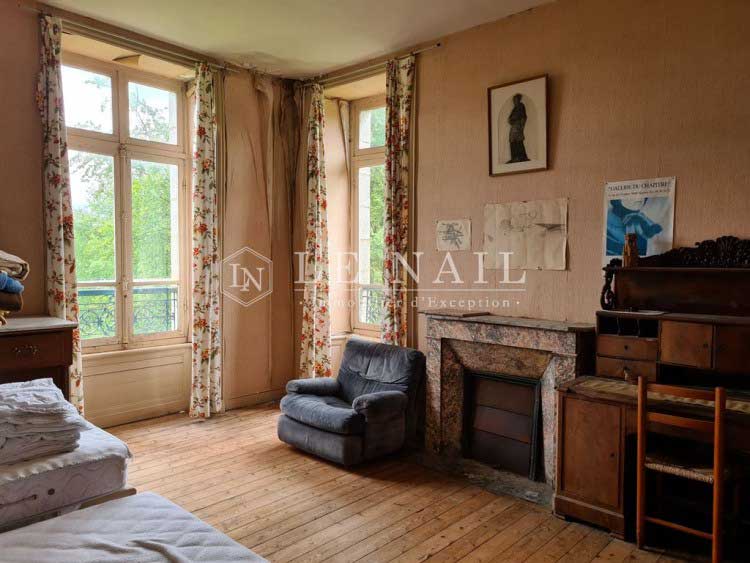 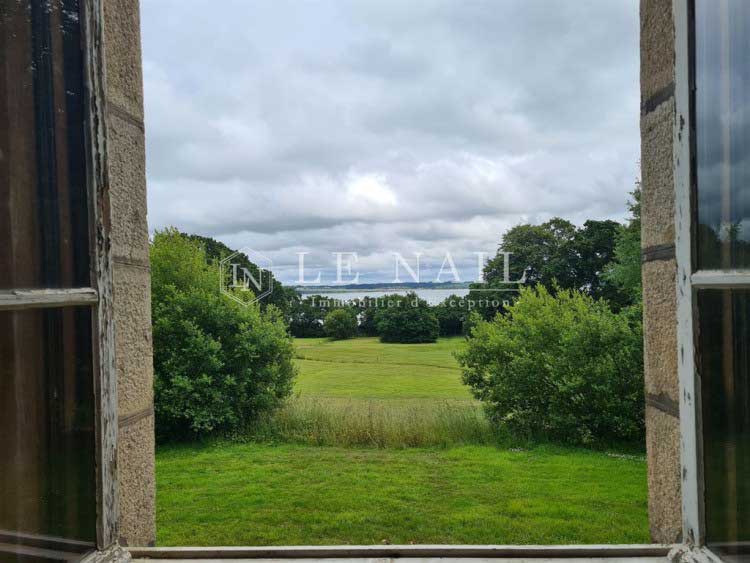 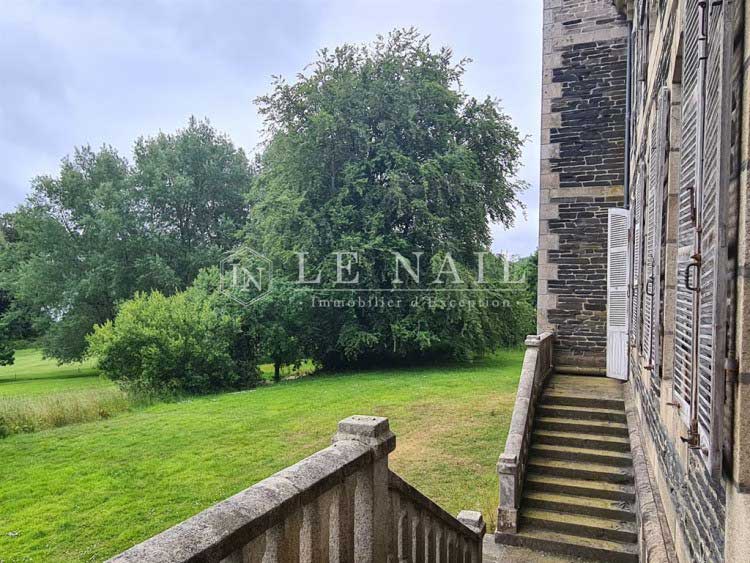 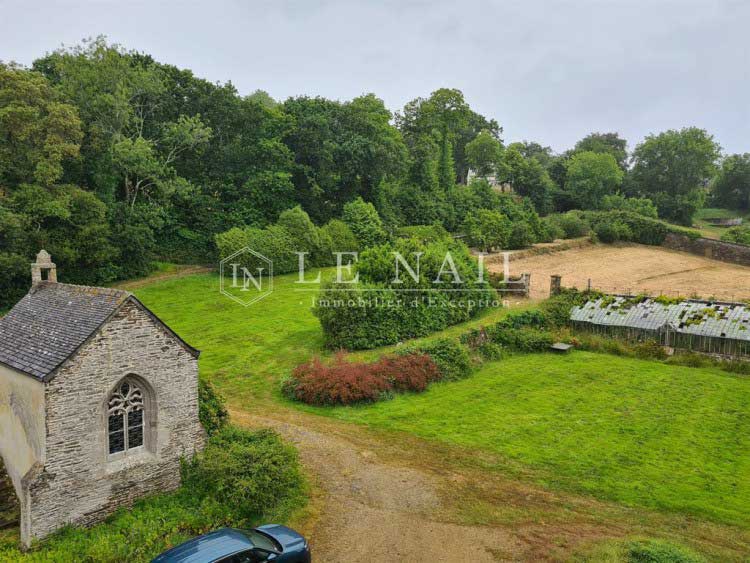 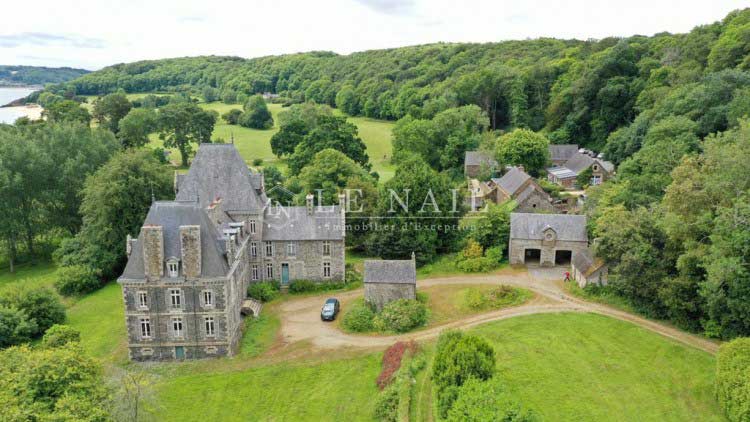 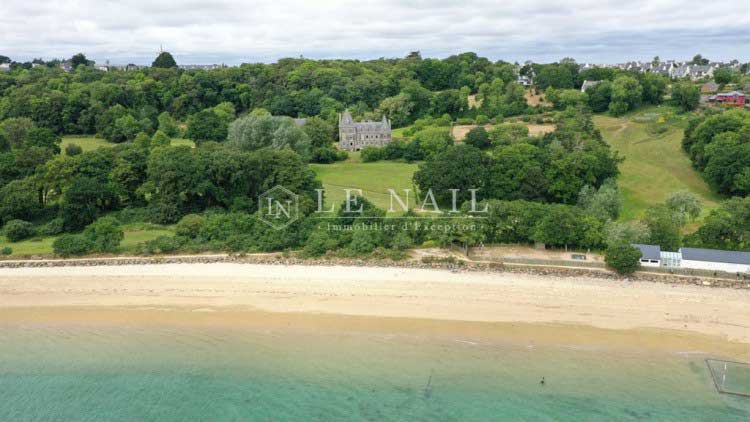 The property is located in Brittany in the Finistère area, in a territory particularly prized for its quality of life: Carantec.
Situated on a preserved peninsula in the heart of the Bay of Morlaix, the seaside resort of Carantec welcomed lovers of authentic Brittany in the late 19th century. Exceptional panoramas and a gentle way of life, the coastline and fine sandy beaches make it as a popular destination.
The natural heritage of this area will delight your senses.
Facing the bay of Morlaix, sheltered from the sea winds coming from the open sea, the castle benefits from this marvellous setting surrounded by luxuriant vegetation. You can walk to the largest beach of Carentec, the Clouët beach, which is about 100 meters from the front door - as well as to the golf course which borders the property.
This family property is being offered for sale for the first time.

The old castle, restored in the 18th century, was demolished around 1897; it was then replaced by a new building constructed by François de Kergrist - former mayor of the commune. It is a combination of two local rocks: dark blue schist extracted from the neighbouring cliff for the rubble and Cléder granite for the ashlar. The estate has outbuildings, including a chapel dedicated to Notre-Dame and Saint Sébastien which dates back to the beginning of the 16th century.

This L-shaped building comprises a main building, three bays and two side pavilions in the same alignment, and a wing set at right angles to the main facade, the chateau offers approx. 775 sqm of living space, divided as follows:
Basement: the same surface area as the main building and the two side pavilions, it comprises various rooms and areas (workshop, wine cellars, coal cellar, etc.); the access to the outside and the garden is possible.
Raised ground floor: the entrance hall leads to a bedroom, a bathroom and a kitchen in the north pavilion (with access to the double stone staircase on the east side, towards the Bay of Morlaix). A large lounge, a small lounge and the dining room offer a sea view. The large hall opens onto a monumental wooden staircase. The first floor can also be accessed via the service stairway which borders the laundry room and the former kitchen, flanked by a large scullery.
First floor: the wing has two bedrooms, one of which has a shower room. The south wing has two other bedrooms and a room with a washbasin. The same applies to the central building (with a dressing room for one of the two bedrooms). The northern pavilion: a kitchen has been installed, with a shower room to which is added a bedroom giving access to the large corridor.
On the 2nd floor: the layout of the northern pavilion is identical (kitchen, shower room and bedroom). In the main building there are 3 bedrooms. And another in the south pavilion, with its shower room. The attic of the wing of the building is accessible and offers a beautiful space to be restored.
On the middle floor, two independent toilets (with access by a staircase).
On the 3rd floor: in the south pavilion, two large attics have been used as accommodation. In these attics, inscriptions of American soldiers who stayed there during the Second World War are still visible on the doors and walls; a moving testimony of the history that marked the castle.
The attics of the main building and the north pavilion are easily accessible.

The outbuildings consist of several buildings:
a former dairy, with a drinking trough fed by a natural water source that crosses the property (and which now feeds the 2 toilets situated halfway up the floor)
a building with two large doors, a dormer window decorated with a magnificent bull's eye; access to the first floor is at the back, via an external stone staircase
two pyres (one large and one small)
In addition, a chapel - dating from the 16th century - is placed in front of the main façade of the castle. It is dedicated to Our Lady and Saint Sebastian. An external staircase leads to the gallery. The stained glass window was redone about fifteen years ago.
A glass roof of more than 60 sqm of floor space needs to be renovated to restore its former glory.

The land is approximately 2.47 acres.
It is characterized by a green and privileged environment, and offers various spaces, in particular
an old large orchard / vegetable garden, enclosed by a wall, covering more than 3,000 m² (0.25 acres)
a large walled farmyard and its dovecote

The Clouët beach is located a short distance away (about 100 metres); access is by crossing the golf course.