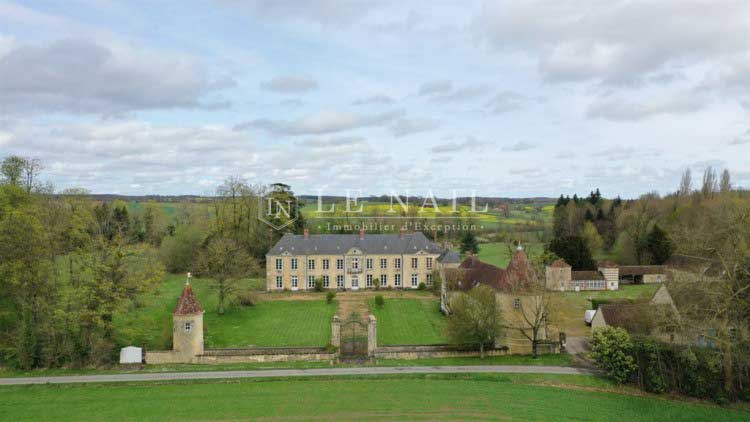 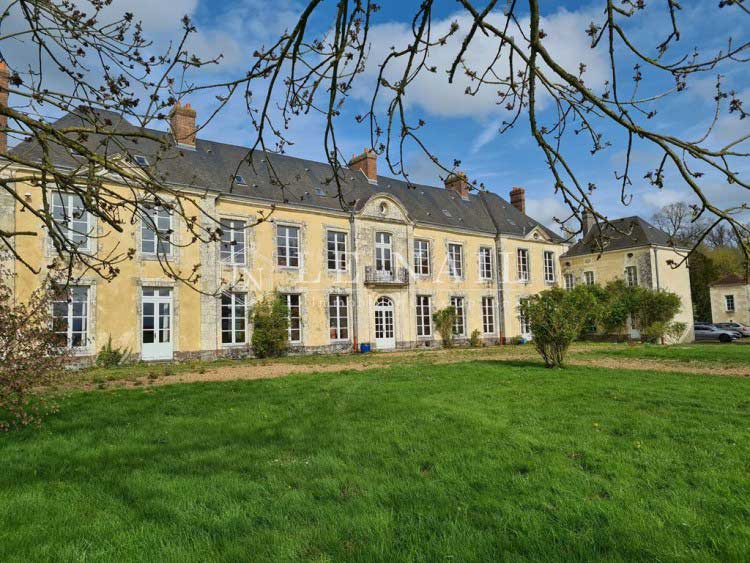 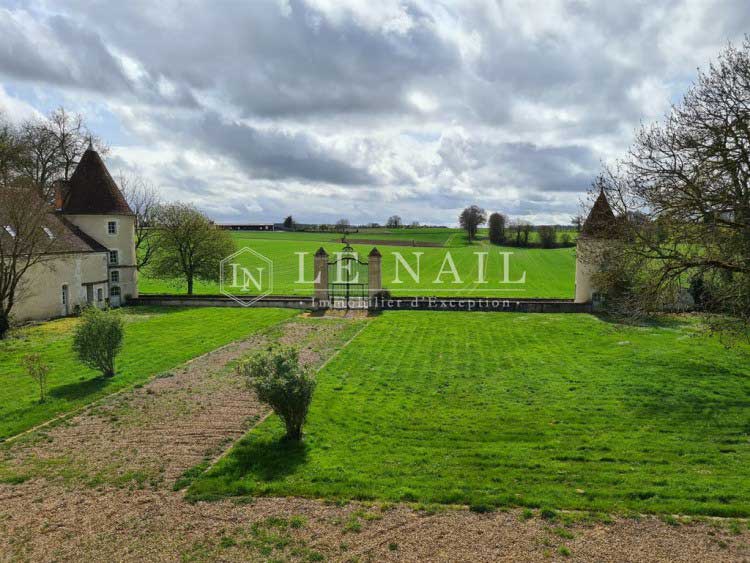 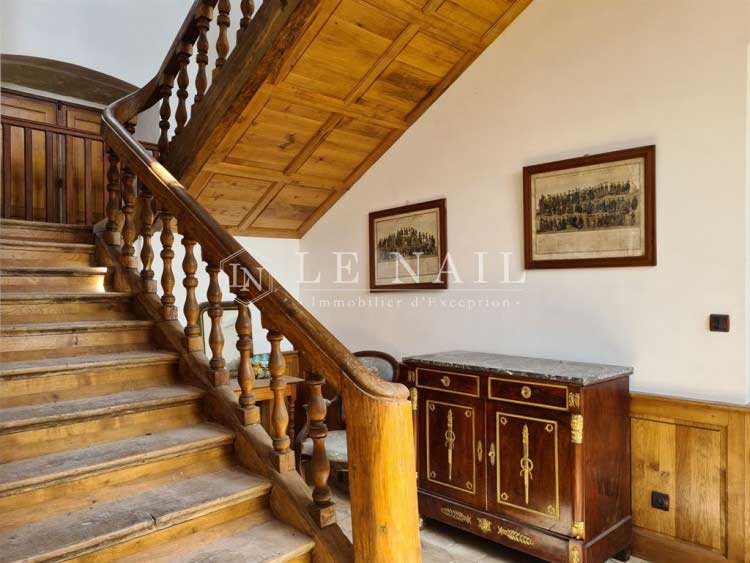 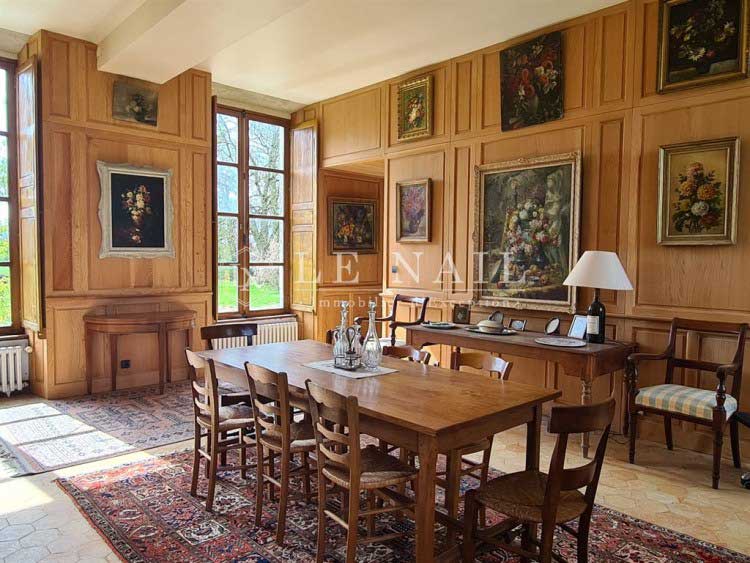 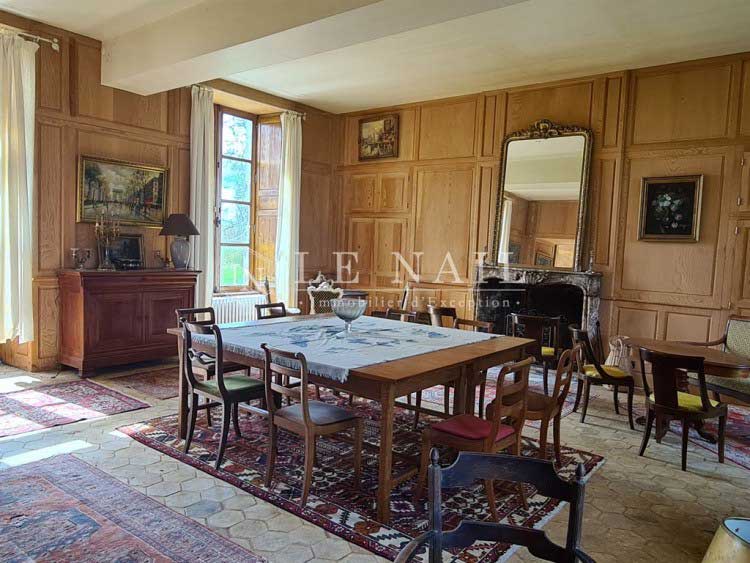 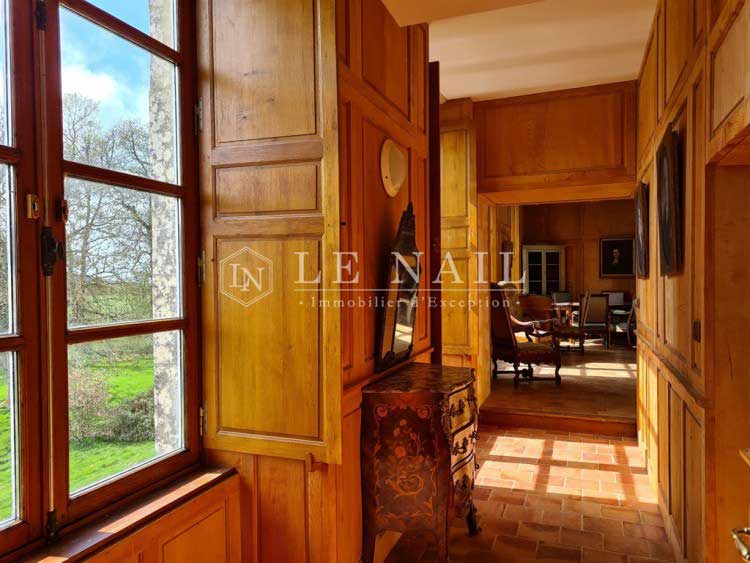 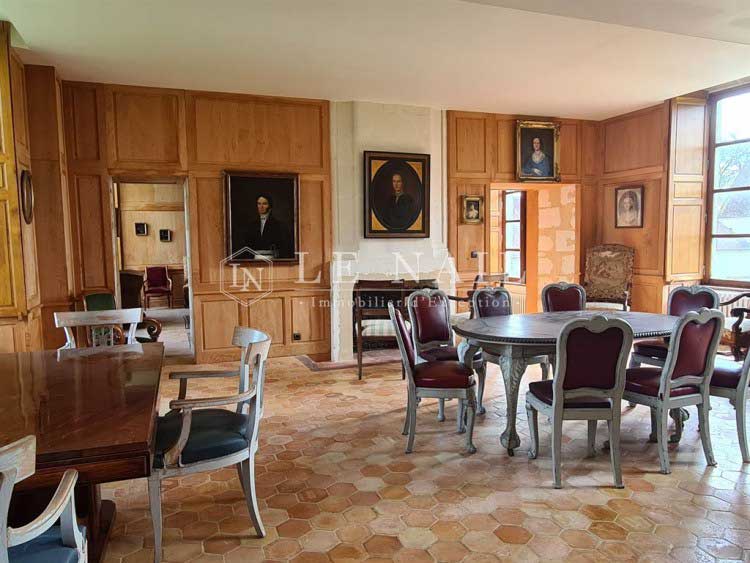 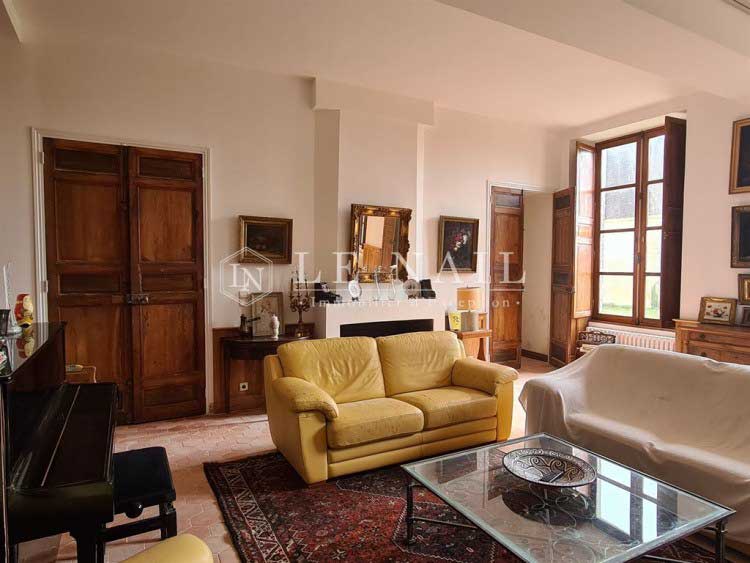 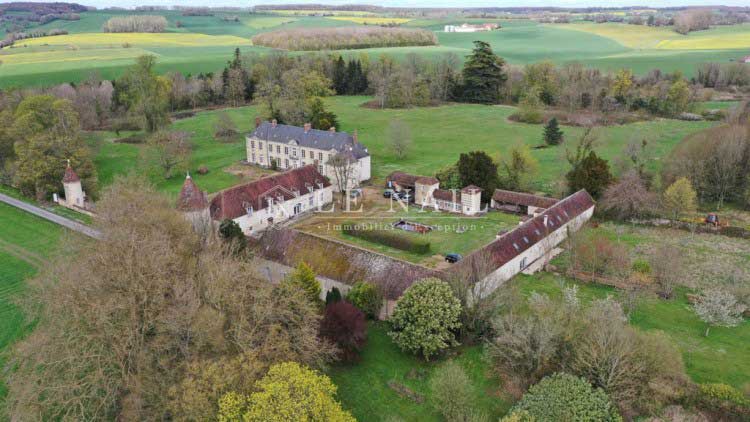 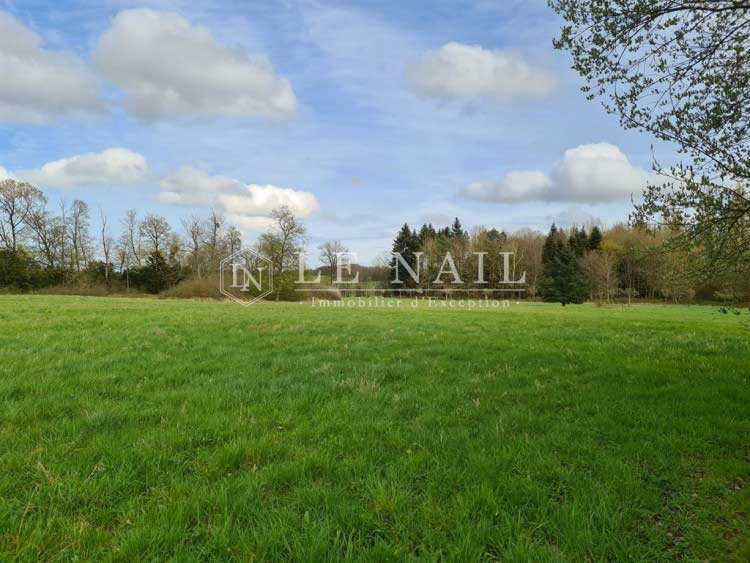 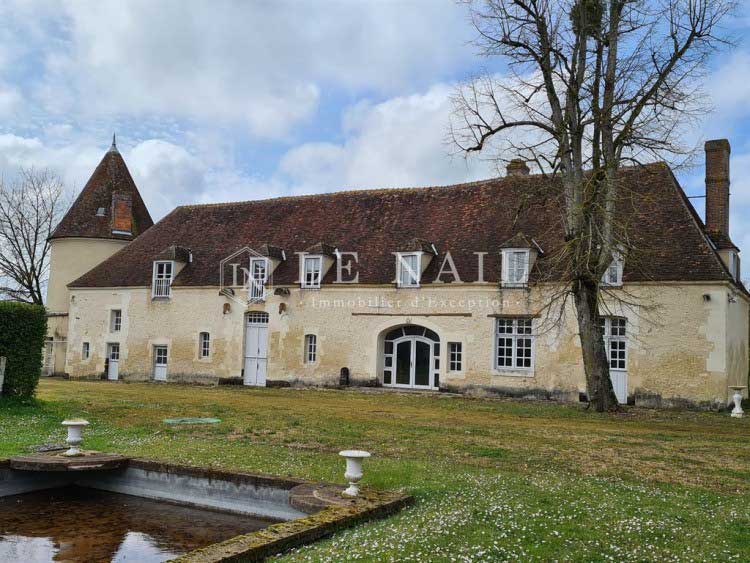 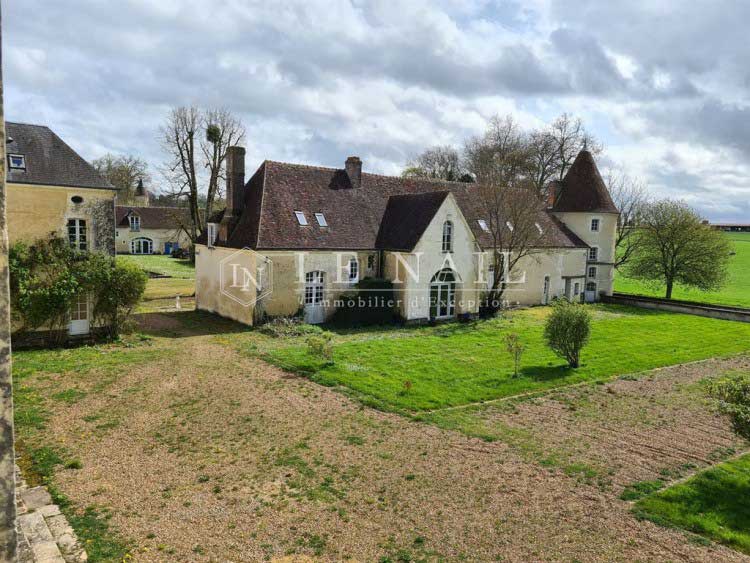 Ref.3967 : French chateau for sale in Normandy.
This fine and handsome listed chateau is found in the perche region, famous for its rolling hills and 1h30 from Paris and 10 mins away from a town with all services including a train link to Paris.

This beautiful chateau was built between 1604 and 1620, then in the 18th century, an elegant broodmare called La Jumenterie was added.
Of Classical rectangular style, the Château is accesed by a monumental wrought Iron entrance. The three-floored building has an annex at right angles, a fine outbuilding courtyard crowned by the broodmare station with its horsehead sculptures and adorned with its orangerie, dovecote and a rectangular basin.

The château has approximately 880sqm construction, and is composed of :

Ground floor: At the left of the main entrance a monumental wooden staircase, two salons with chimneys whose windows face north/south that render fine luminous views of the park. To the right of the entrance a salon with chimney and a spacious kitchen with fireplace lead up to the annex with a room facing east/west. Cedar and oak wood panneling match the exquisite double glazed window frames with blinds all along the length of the passages and rooms.

First floor: To the right of the magnificent staircase one moves along the south facing corridor past a chapel room to a grand salon, all cedar panelled. A small forged iron south facing balcony donns fine views as far as the eye can see. To the left, two spacious rooms with bathrooms, as well as extra wc amenities with washbasins cover the length of the building. The annex, at the extreme east of the Château, offres an bedroom.
Second floor,

The same mangificent staircase continues to the third level, where four large bedrooms each with an ensuite bathroom and double washbasins have been cleverly fashioned, each sporting beautifully restored roof beams. Bulls-eye windows add to the charm of this floor. An additional room again is found at the end of the corridor in the annex.
The whole property has night spotlight illumination that ehnances its charm.

The Jumenterie has been fully renovated, Consisting of 480sqm floorspace, it has two salons, one with vast french windows with a wooden staircase that leads to the rooms above. The second salon has kitchen amenities. The stables, also on the ground level have great potential for other use. The first floor has been completely redone into six rooms, all with ensuite bathrooms and double washbasins. Heating is fully electric, with individual sanitation. All windows are double glazed.

The gatekeeper?s house has three bedrooms, a fine salon with chimney and kitchen. Fully restored as the rest of the château, and has approximately 140sqm floorspace.

Another house of approximately 110sqm in the oubuildings has a salon, kitchen, and two bedrooms on the upper floor.

The outbuildings also consist of large barns with excellent potential for hosting events and or adding new rooms.

Modern stables including a saddle room, and a swimming pool (in need of refurbishment) are found to the east of the Château.

The property has 56.83 acres (23 hectares) of land, comprising of a pleasant english styled park, woods and fields. Oak, cedars of Lebanon, beech and yew trees adorn the landscape. The rolling hills of the Perche region provide pleasing and restful views as far as the eye can see.